VLT: The MUSE instrument unveils an unknown “cosmic web” in the Universe 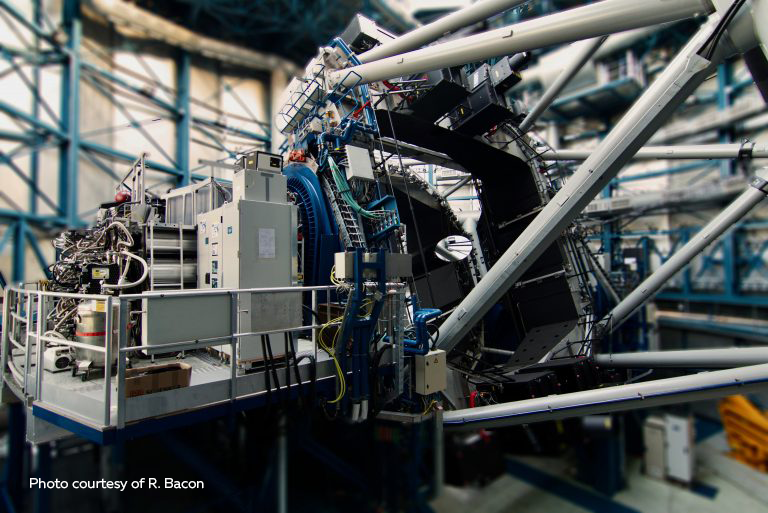 In Spring 2021, the Very Large Telescope (VLT), equipped with the Multi-Unit Spectroscopic Explorer MUSE, captured the first direct image of a myriad of unsuspected dwarf galaxies: a remarkable discovery for the European Southern Observatory (ESO)!

Located in Chile, the flagship facility for European ground-based astronomy allowed the discovery of hydrogen filaments stretching across 15 million light years, within which galaxies form. Although known to the astronomers, this phenomenon had never been observed before.

To fulfil such a difficult task, the VLT has been equipped with the integral field spectrograph MUSE, whose project was initiated and led by Roland Bacon, astronomer and Director of Research at CNRS*. This revolutionary instrument allows for the exploration of the Universe in three dimensions, as well as the searching of young galaxies, regardless of their distance, in observing the sky in the direction of southern hemisphere. In order to probe a wide field of view, MUSE uses twenty-four 3D spectrographs, coupled with an adaptive optics system. The latter corrects the perturbations due to the atmosphere in real time, as they interfere with the luminous signal of young galaxies and mask their detection. With its 370 million pixels, the instrument can also cover a complete field of view and analyse both spatial and spectral information simultaneously.

Winlight System participated in the conception of the instrument by supplying more than 2,500 optical components and complex sub subsystems, among which:

Either fixed or moving, these optical components and complex subsystems have been operated since 2014 and are still delivering high performances.  Winlight System is undoubtedly proud to have been an active participant in the design and development of such a leading-edge instrument, which could one day help to understand the early stages of galaxy formation and evolution.